Among the brand new A-111-6 mini synth module they will show the prototypes of some planned new modules:

Joystick module A-174-4 outputs three control voltages generated by a spring-loaded X/Y cross potentiometer (so-called joy stick) and a Gate signal.
The control voltages for X and Y are controlled by the X and Y position of the joystick in the usual way. The third control voltage Z is controlled by the rotation of the spring-loaded joystick knob.
The offset voltages which are added to the inverting outputs can be adjusted by means of three small potentiometers. That way different kinds of control voltage ranges are possible.
On top of this the four quadrant voltages Q1, Q2, Q3 and Q4 are available. A quadrant voltage becomes positive when the joystick is positioned in the quadrant in question. Each CV output is equipped with an LED that displays the present voltage

Module A-130-8 contains eight linear voltage controlled amplifiers (VCAs). Each VCA features a control voltage input, a signal input and a signal output. In addition three mixers are included for the sum of the output signal 1-4, 5-8 and 1-8.


A-133-2 Dual VC VCA/Polarizer/Inverter/Ring Modulator is the slim version of the A-133 but has some additional features and improvements available compared to the A-133.
Module A-133-2 can be used for many applications: e.g. VCA, VC polarizer/attuverter, VC inverter or ring modulator. The module contains special VCAs that allow both positive and negative amplification.


Module A-183-4 is a fourfold level shifter.
A level shifter is required if the level of a digital control signal has to be increased or decreased. A typical application is the conversion of a gate, trigger or clock signal with +5V voltage level to +12 level.
The output level can be set by means of a jumper to +12V or +5V. The four output signals are displayed by means of LEDs. The outputs and inputs are normalled: the output signal of the upper unit is used as input signal of the unit below provided that no patch cable is inserted into the input socket of the lower unit. That way the module can be used also as clock/trigger/gate buffer or buffered multiple for digital signals. For this the signal that has to be buffered is connected to input 1. The buffered (and possible level shifted) signal appears then at all four outputs. Input voltages below +0,8 V are treated as "low", voltages above +3 V as "high" 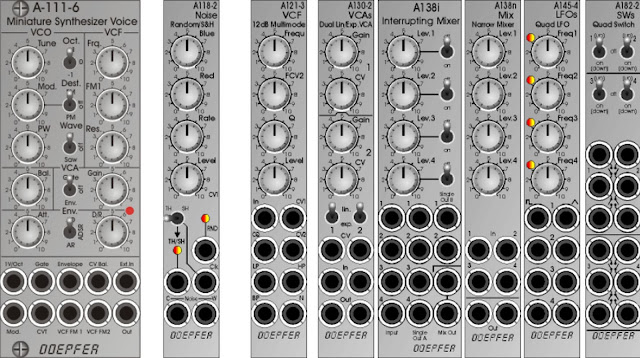 Early contributors to this blog DivKid and Felix from the Tuesday Night Machine finally had the time to have a talk with Dieter Doepfer at a  recent Thomann event...

" A rare moment of free time and having great people in the right place at the right time here's an interview with Felix of Tuesday Night Machines talking to Dieter Doepfer, THE CREATOR OF EURORACK at the Thomann Synth Reactor #TSR19 event.

Felix and I wanted to chat to Doepfer about both his history (the history or Eurorack), his current polyphonic modules, future module sand ideas and a quick look at what the future of the Eurorack might be.
We also talk about the Elektor Formant DIY synth, the new Frequency Shifter module coming later this year, CV controlled LED lighting, Dieter was also the EU distributor for Doug Curtis' Curtis chips/components, Raul's World of Synths, favourite Doepfer modules and plenty more. "

Robin Vincent of MoltenModular had the opportunity to sit down with Dieter Doepfer, the inventor of the Eurorack format, and chat about modular with a specific focus on his new polyphonic range of modules.

" Thomann took a bunch of YouTubers to their shop and told us to go play and make videos.
So we did.
This is straight to camera, one take, off-the-cuff, honest and fabulous.
Thanks to Thomann for the opportunity and thanks to Moog for the loan of the ONE (that I then had to give back).
Search for #TSR19 for more fantastic videos from fabulous synthesizer YouTubers. "

German Krautrock legends Kraftwerk and Dieter Doepfer have worked together for a long time.
As the only one in its industry Dieter Doepfer even may use their name for advertising purposes.

Dieter: One day i got a call from a Mr. Schneider who wanted to know if we could rebuild a special keyboard into a MIDI keyboard.
The caller was Florian Schneider of Kraftwerk. Schneider experimented much with speech synthesis, and had found a keyboard that was triggering speech sounds (phonemes) in place of letters.

After the modification by Doepfer, Schneider was able to send signals to a sampler in which the sounds were stored.
In the end, the Kraftwerk operator could connect the phonemes with a sequencer into sentences.
Until it worked, Schneider had come several times to Munich, where they got to know eachother better.
Around that time, Dieter installed a MIDI-retrofit on their old EMS vocoder.
Also in the construction of the MAQ 16/3 analog sequencer with MIDI output, the company worked with the musicians.

Florian Schneider was apparently quite involved with the development of the 16/3, being regularly sent updates to the operating system and giving his comments in return.

Dieter: "Since then, we are allowed to use the name Kraftwerk to the device. But we do not want to overdo things"
In 1996 Florian Schneider also wrote a review for a German music magazine 'Keys' about one of the Doepfer company's newest items, the A-100 vocoder module and even contributed a short demonstration of the units capabilities on the free CD that accompanied the magazine.

During 2001-2002 Morgan Karlsson asked Dieter Doepfer about his collaboration with KRAFTWERK:


" Our collaboration with Kraftwerk started many years ago as we made some special designs for them (e.g. the miniature keyboards they use on stage for Taschenrechner/Pocket Calculator and a special phonetic keyboard for voice synthesis).

The first unit we built in cooperation with Florian Schneider was the MAQ16/3. We built some prototypes and Florian tested them and told us what we would improve and which features are not required.
So we went many times to the KlingKlang studio in Dusseldorf until the final version of the MAQ was complete.

A similar cooperation - but not as close as with MAQ - was made for the SCHALTWERK.
(Kraftwerk also used/tested with a Doepfer MOGLI on stage around that time *PP)

We learned a lot about vocoders e.g. that a treble boost of the incoming speech signal is very
important for a good vocoder effect (is now included in the A-129-5).
All high priced vocoders imply such a treble boost but the customers is not aware of this detail as there is sometimes no remark in the user manuals.
We experimented together with Florian with a 32 band graphic equalizer to find the best treble boost for good speech recognition and implemented it into the A-129-5."

As far as I know it is an open project - step by step - which could possibly finish with a Doepfer movie.
I like the way it is filmed anyway... but i have the feeling that it might become a looooong project.
I contacted the makers and hope to follow-up this blogpost with more info.

#07 Interview with HANS ZIMMER - A private conversation with Hans Zimmer and Dieter Döpfer
The Secret Doepfer Files from Open Video Medien Labor on Vimeo.
Hans Zimmer: "The reason why I like 'playing music' is because the word 'play' is there."
From https://vimeo.com/115523628

#08 Backstage Talk with JEAN MICHEL JARRE - after his concert at Philharmonie, Gasteig Culture Centrum in Munich 22.03.2008"
The Secret Doepfer Files 08 - Dieter and Jean Michel Jarre from Open Video Medien Labor on Vimeo.
Dieter Doepfer: "All the bread-and-butter analogue modules are done... most what can be done with analogue circuits is (already) available"
From https://vimeo.com/115544995

On December 6th of last year, SchneidersLaden in Berlin had Dieter Doepfer as a special guest.

Dieter baked cookies (yes), gave a modular beginner workshop, did a presentation of his latest products and performed an interesting liveset.

You can see the  A-197-3 VCO controlled RGB LED prototype in this video too (the dynamic LED control start about at 6:40)

Schneidersladen uploaded four videos of the evening - all worth checking out!