My third and last post about the New Doepfer announcements for NAMM 2018... (January 25/28 2018, Anaheim, Hall A, booth 10706)
The other 2 blogposts are about the  Dark Energy III and their new Polyphonic Modules...
Among the newly announced "Standard Modules" there are these little gems

By means of internal jumpers one can select which parameters are controlled by the CVT input (e.g. D only or D+R or A+D+R) and in which direction (i.e. if an increasing CVT shortens or stretches the time parameter in question). By means of another jumpers output 2 can be set to normal or inverted envelope).
Two more jumpers are used for the optional bus
access to the gate signal of the bus for each ADSR.

A-142-3 Envelope Controlled VCA Module A-142-3 is the combination of a simple AD/AR envelope generator and a VCA behind a front panel with 4HP only.
The type of envelope can be selected by means of a toggle switch between A/D (Attack-Decay) and A/R (Attack/Release). Another toggle switch is used to choose envelope or (free running) LFO mode.
The envelope output controls a linear VCA.
These controls and in/outputs are available:
• Attack control
• Decay/Release control
• AD/off/AR switch
• Envelope/LFO switch
• LED (envelope display)
• Gate Input
• Manual gate (momentary switch)
• Envelope Output
• VCA CV Input (normalled to Envelope Output)
• Audio Input with Level control
• Audio Output (the outputs of several A-142-3 can
be internally mixed together)

Furthermore, the modules that were already announced at Superbooth 2017 like the A-138s Mini Stereo Mixer and A-150-8 Octal Voltage Controlled Switch will be available pretty soon now...  and the A-180-9 got a final facelift and got upgraded from 12 to 14 channels through standard network cables.


Read more about those modules at
http://patchpierre.blogspot.nl/2017/04/superbooth-2017-new-doepfer-module.html

Right in time for the upcoming NAMM exhibition later this week (January 25/28 2018, Anaheim, Hall A, booth 10706), Doepfer announced a few more interesting A-100 modules (next to the Dark Energy III news). Too many new modules for one blogpost, so I had to split it up into multiple blogposts... The next one will contain their new 'standard' modules.

The magic word for Doepfer this year seems to be Polyphony, because most of the new products are perfect companions for the highly anticipated A-190-5 Polyphonic CV/Gate Interface, a module that has been in pre-production for a loooong while now.
On the Doepfer website we can still read the message We cannot yet specify a definite release date but hope that it will be available in 2011, from the early prototype stages.
We already know most of its features, i have been blogging about it since 2011, but here are the details once more:

A-190-5 is a Midi/USB interface that generates 4 gate signals and 12 control voltages to control up to four synthesizer voices (i.e. VCOs and associated modules like envelope generators, VCFs and VCAs) for polyphonic sound generation.
The A-190-5 will be equipped with different polyphonic, duophonic, paraphonic and monophonic modes which are selected by means of menu buttons and the display.
For each channel a gate, a note controlled CV (1V/Oct.) and two auxiliary CVs (e.g. for velocity or controlled by midi control change messages) are available. In play mode the states of the four gates are displayed by four LEDs integrated into the buttons 1-4.
Firmware updates are possible via USB.

The A-111-4 Quad Precision VCO will be available soon too... adding 4 wide-range precision-VCOs to complement the Polyphonic module and was already announced at Superbooth 2017. Read all about this at http://patchpierre.blogspot.nl/2017/04/superbooth-2017-new-doepfer-module.html

Brandnew is the A-105-4 Quad SSM VCF filtermodule, their first polyphonic filter and contains four identical 24dB Lowpass filters (SSM2044 type).
The special feature of the 4 pole low pass SSM2044 is the patented so-called "true open loop design that delivers a characteristic fat sound not available from other devices"

Each filter has available a separate FM input as well as an Audio Input and Output. The FM input is typically connected to the output of the associated envelope
generator (e.g. A-141-4). The envelope amount for all four filters is controlled by the FM knob and the CVFM input by means of four built-in VCAs, which are controlled by the FM control and CVFM input.


This allows also voltage control of the envelope amounts. In addition common frequency modulation for all filters is possible (e.g. by an LFO). For this the CVF input with attenuator can be used.
The range of the audio input level control (L) allows also clipping/distortion with typical A-100 audio levels (e.g. from A-111-4) at the filter inputs.
Even this parameter is voltage controllable as well as the resonance (Q).
Application: polyphonic patches (four VCFs with same parameters)

Another new Polyphonic module is the A-132-8 Octal VCA:
The A-132-8 contains four VCA pairs. Each pair includes two daisy-chained VCAs. One VCA has a linear control scale, for the second VCA linear or exponential control scale can be chosen by means of jumpers.
Doepfer decided to provide two VCAs for each voice because usually one VCA is required for loudness envelope and a second one for velocity (or another function).
For each VCA these in/outputs are available:

• CV Input VCA 1
• CV Input VCA 2
• Audio Input
• Audio Output
Audio Sum Output is also available.
The module features two Initial Gain controls, that enable the opening of the first (G1) and/or second VCA (G2). This is necessary when the VCA in question is not in use (i.e. no external CV available). Otherwise the VCA would close. They are also useful for testing polyphonic patches.
Application: Polyphonic patches with two VCAs per voice.

New Podcast: Why We Bleep by Mylar Melodies

I've been a long-time fan of Mylar Melodies. and his (Eurorack) video-productions, and yesterday he released the first episode of a brand new monthly podcast interview-series. The new show is called Why We Bleep, and in it he meets electronic music makers and the people who make their equipment.
He explores their experiences, their processes, and see what can we learn from them.
"The show is inspired by an eternal struggle to get better at making music. To better understand the mysterious, unique and amazing people behind the equipment and music that we love. And to better understand where music making might be going.", according to the creator.

The podcast is available on iTunes, YouTube, and HERE on his site, and takes the form of a conversation recorded in-person, and also captured on camera where possible. 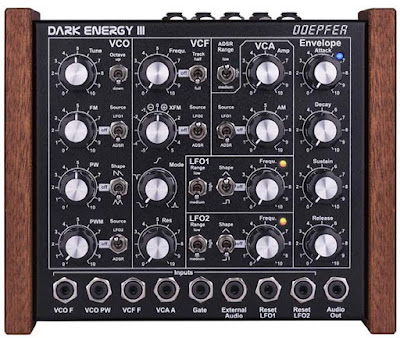 I will post the new A-100 modules in another blogpost, but first the exciting Dark Energy III


Dark Energy III is the successor of the Dark Energy II, a monophonic stand-alone synthesizer with USB and Midi interface. Main differences between II and III are an
improved VCO (no warm-up period, additional triangle waveform, wider frequency range), resettable LFOs, improved ADSR and a lot of internal access points for DIYers.

This will make it easier for DIY-ers to create their own breakout boxes with extra functions, like Organzoner did a while ago... He posted a great video with a step-by-step tutorial on how to expand the capabilities of the Doepfer Dark Energy 2 by adding a breakout box...

The filter of the Dark Energy II has been unchanged.
The sound generation and all modulation sources are still 100% analog, only the USB/Midi interface contains digital components.