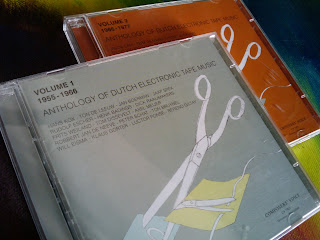 Okay... I haven't had much time to write and post these last weeks because i'm too busy working this summer, but i'm not completely sitting still. 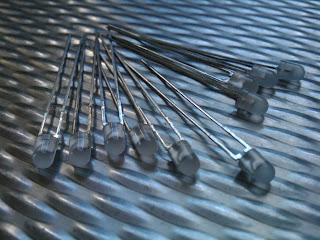 The new blue LEDs that I ordered arrived, so the next few weeks i will only be replacing some red LEDs by blue ones.
It's not the most exiting modification, but it will make my A-100 system more pretty IMHO.
( Info on replacing LEDs HERE )

I do have time to read during my work, and i'm reading a very interesting (Dutch) book called "Onder Stroom" by Jacqueline Oskamp at the moment.
This book tells the story about the history of electronic music in the Netherlands, so expect a book-review of that in the near future.
( The book is slightly related / overlapping  THIS )

I will be back with some more interesting posts in a few weeks... so please stay tuned!
No comments:

A few times I've been asked about how patch-cable lengths ( of CV and/or Gate signals ) can affect signal strength.
I found a few interesting posts in the Yahoo Doepfer Usergroup that might make things a bit clear to you.

First of all;
Gate cables even longer than 10 meters usually are no problem.
Although a gate signal might get slightly weaker when you use extremely long cables, the (simple) gate signal will often stay strong enough to trigger your modules.
CV-Cables of this length may have a slight loss depending on the electrical characteristics of the input and the output.
There are ways to measure it,  but it is very difficult to judge whether a not completely clean octave tracking is caused by long cables.
Real loss of signal quality starts with asymmetric audio cables at such a length, and you have always to keep in mind that electromagnetic and electrostatic influences (hum and sizzle) can affect longer cables more than shorter cables. 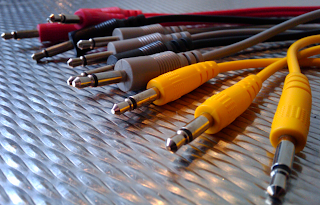 " From a theoretical point of view (for anyone interested) the key things are output and input impedance, cable capacitance and resistance.
If you take a relatively standard low-cost coax cable of say 380pF/m and 128 Ohms/km this will not cause any noticeable loss in audio top-end from a 1k Ohm output impedance until you exceed 20m or so but you are more likely to get increased noise and interference.

From a CV point of view the cable resistance is a more important parameter (if your CV is controlling VCOs that is) but even 20m is only 2.6 Ohms so this can be ignored compared to the high input impedance of most VCO CV inputs; again long lengths are more prone to pickup so 50Hz mains can modulate the CV.
( you may also experience hum loops by just connecting gear together that is powered from different power outlets across the room ). " * 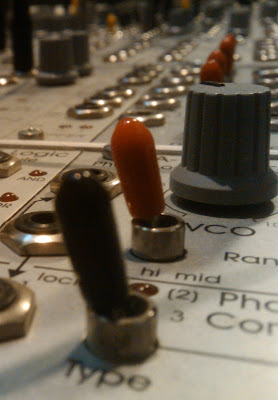 " I talk by playing, not by words..."
Bernie Worrell  Musician, Keyboardist, Composer, Producer, best known as a founding member of Parliament-Funkadelic
No comments:

Another new Poll at the  Doepfer A100 Modular System Users Group is up.
This time it is about the idea of realizing a Doepfer Analog Shift Register A-100 module.

A few days ago this was posted:
" ...It has been a while again, so I'll bring it up again. I believe it is time for a Doepfer analogue shift register... Does anyone agree with me?... " (*edited)

To be honest, i had never heard of an Analog (or digital) Shift Register, but a quick search on the web provided some hugely interesting information.
For the basic theory on what a Shift Register does i'd advice you to read the Wikipedia page first.

Doepfer does call it's own multifunctional A-152 a "Voltage Addressed Track&Hold / Analog Shift Register (ASR)/ Octal Switch (Multiplexer) ",
but Hardsync writes " I own a Doepfer A-152, and my opinion is that the claimed ASR function of the A-152 will not get you the true ASR results you might expect. The A-152 is a switch. A very powerful and sophisticated one, but it will not push the value of one output into the next. Therefore, not a ASR as we defined."

Dieter Doepfer himself replied to the new poll very quickly;
" Though the A-152 is not a real ASR you can do similar things with this module. The most frequently mentioned application is to distribute a control voltage to the CV inputs of several VCOs.
At the rising edge of the clock signal of the incoming CV is sampled and routed to the next VCO. For this function an ASR is not essential as the VCOs are equivalent.
But there may be applications that require a "real" ASR (I'd be interested in applications where an ASR is required and that cannot be realized with the A-152).
In case that we will develop an ASR we'll go the digital way, i.e. ADC - processor - multiple DAC.
This has a lot of advantages, e.g. no voltage loss of the analog S&H capacitors, included quantizer for VCO pitch applications and some more.
But I'm not sure if the expected sales will justify the development of such a module (especially as we have already the A-152 available).

Update August 3 / Dieter continued;
" We already discussed the chance of multiple functions in the company.

One could treat the ASR as kind of a ring memory that could be "filled" in different ways. E.g. from a CV source via AD conversion (the usual ASR) but also via Midi or USB. The ring memory could be looped or not by means of a simple switch.
One could combine the module with arpeggiator functions, e.g. fill the memory by playing a chord on a keyboard and then use only one of the CV outputs.
One may also fill it with several analog CV's and the filling could be triggered by a gate signal (i.e. output of a sequencer or a CV/gate keyboard). That way one could combine several similar functions in one module. From my point of view this would make more sense than a pure ASR.
One could combine the functions of an ASR, arpeggiator and and a rudimental digital sequencer. For ASR the number of steps could be limited e.g. to 3 or 4, for the arpeggiator and sequencer more steps make sense. A lot of ideas for the long evenings of the upcoming

The question in the poll is plain and simple;