Low Frequency Oscillators or LFO's produce periodic control voltages that can be used as a modulation source for all kinds of other modules. 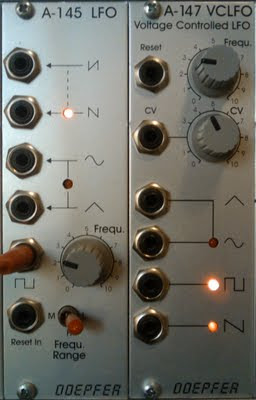 The A-145 LFO1 was the first and one the most basic single Low Frequency Oscillators that Doepfer sold.
It provides 5 different waveforms; sine,sawtooth, triangle, pulse and inverted sawtooth ,and each waveform has their individual (and simultaneous) output.
With the Frequency-knob and the 3-way switch you can select a wide range of frequencies, from on cycle every minute up to audio frequency at the highest.
A reset input allows you to synchronize the LFO signal to an external trigger signal and each trigger will re-start the waveform from its zero-point.

The most obvious use for an LFO is to do some pitch modulation on a VCO to create a vibrato and to modulate amplifiers (VCA's) for a tremolo effect, but with a creative mind you can use these two modules for all kinds of sound manipulating.

The A-147 Voltage Controlled LFO is basically the same LFO as the A-145.
It doesn't have one of the A-145's sawtooth waves, but does have an extra Control Voltage input that is very useful.
Think of an A-174-2 Wheels Module or A-174-1 Joystick Controller as the most used control voltages, but dare to think further... how about controlling the A-147 frequency with noise or perhaps another LFO for example?
My personal favorite use is to put a voltage of an A-198 Ribbon Controller or Theremin Voltage though the CV input and send it to an VCA to get a tremolo effect, but at a higher frequency in the higher notes.

I will discuss the A-146 LFO2 in a future post because it is a slightly different module with different features and uses.

Email ThisBlogThis!Share to TwitterShare to FacebookShare to Pinterest
Labels: A-145, A-147, LFO, Modulation, Module Review