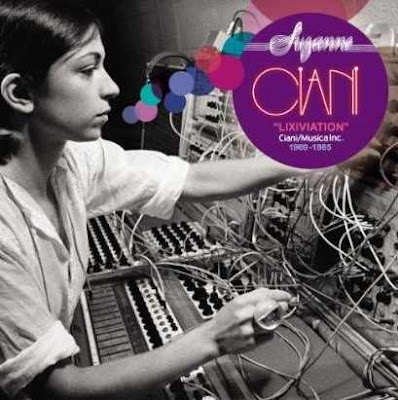 My latest album-tip is a very recent one, released a little over a week ago.
This album, a compilation of older works from multiple grammy-winning composer/synthplayer and pioneer Suzanne Ciani gives us a nice overview of her electronic works from the years 1969-1985.

From the Finders Keepers Records blog:
" With a sonic portfolio that boasts commissions for the Xenon classic pinball machine, the sounds for the Meco Star Wars theme, the Atari TV commercials and the electronic sound effects in the original Stepford Wives film (amongst many others) the mutant electronic music CV of Suzanne Ciani is proof that in a 1970s commercial world of boys toys, monopolised by a male dominated media industry, a woman’s touch was the essential secret ingredient to successful sonic seduction.
A classically trained musician with an MA in music composition this American Italian pianist was first introduced to the synthesizer via her connections in the art world when abstract Sculptor and collaborator Harold Paris introduced Suzanne to synthesizer designer Don Buchla who created the instrument that would come to define Ciani's synthetic sound (The Buchla Synthesiser).
Cutting her teeth providing self-initiated electronic music projects for art galleries, experimental film directors, pop record producers and proto-video nasties Suzanne soon located to New York where she quickly became the first point of call for electronic music services in both the underground experimental fields and the commercial advertising worlds alike...

...Lixiviation complies and recontextualises both secret music and commercial experiments of Suzanne Ciani made for micro-cosmic time slots and never previously documented on vinyl or CD.
This is the first sneak peek of the early Ciani metal music and non-pop that later went on see her nominated for multiple Grammy awards for her later achievements which brought synthesiser music to the new age movement."

The album contains 16 tracks, but only five of them are longer than 2 minutes, up to a track that lasts a little over 9 minutes.
Besides those nice longer tracks it includes some of her work for TV-spots like the famous Coca Cola 'Pop-and-Pour', music from a few Atari-spots and previously unreleased live bits like the wonderful 1975 Buchla live concert-track.
The longer tracks remind me of her 1982 'Seventh Wave' album that is still my favorite Ciani album.
The CD includes a booklet with an introduction by Andy Votel and track notes by Suzanne Ciani.
Overall it is a very nice compilation from this ' Diva of the Diode', a must-have for the collectors.

Check out an extensive CD-review at Pitchfork.

Here's a preview, a track from the CD called 'Liberator', that she made for an Atari TV spot.
SUZANNE CIANI - LIBERATOR by Finders Keepers Records