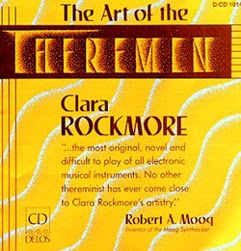 Okay... Either you love the sound of the Theremin, or you don't. If you count yourself to the last category, feel free to skip this post and return to this blog in 3 or 4 days.

Yesterday was what would have been theremin virtuosa and electronic music pioneer, Clara Rockmore's 100th Birthday.
Clara Rockmore ( born as Clara Reisenberg ) studied violin in Leningrad, Russia, but she had to stop her career because of bone-problems due to malnutrition in her youth.
After she moved to the USA she started to work with Léon Theremin, who had recently invented the Theremin, and very quickly she mastered the instrument and became a virtuoso Theremin player.

In all the years performing with USA's finest orchestras and touring she developed a distinguished technique for playing the instrument and she proved that the Theremin really was a serious instrument, and not just an instrument to make 'eerie' sound effects for scary movies.

Although she also did these sound effects on commission, her true love was for the real classical compositions.

This 12-track CD has special arrangements of great classic composers like Saint-Saens, Rachmaninoff, Tchaikovsky, Ravel, Stravinsky and a few others.
Rockmore plays the Theremin beautifully, accompanied by her sister Nadia Reisenberg on piano. Pure and simple. If you are into classical music you will probably appreciate these wonderful recordings.
I have to admit that the tracks do sound a bit sad or moody, but that might just be the power of Clara's playing-style. With this recording and performances she definitely proved that you can really touch someone's soul with this instrument, and that is a great accomplishment with such a difficult to play instrument.

A few more recordings that were made during these sessions later appeared on the 'Lost Theremin Album' (1989), together with other old recordings.
Also worth watching: Theremin, an Electronic Odyssey, a 1997 documentary about Léon Theremin, his instrument and life, including various interviews and performances by Clara Rockmore.
Trialer: HERE