A recent Poll at the Doepfer Yahoo Usergroup, in the beginning of this year gave a nice insight of what modules are the users' favorites. The (informal) poll resulted in a lot of nice top-5 lists, with a great diversity in modules.
I took some time to count the votes that i could find and made this overall -list. /*the differences between the top-three most-mentioned modules were minimal;

The A-149 Quantized/Stored Random Voltages module(s) were definitely the most popular ones.
These modules, based on Buchla's 'Sound of Uncertaincy' Model nrs. 265/266, process random or stored random voltages to contol your other modules. Very interesting modules, that are high on my personal wishlist as well.

Three modules ended in second place;
The A-101-2 Low Pass Gate, The A-155 Analog Trigger Sequencer / A-154 Sequencer controller combination and the A-156 Dual Quantizer
Third place was for the A-160 Clock Divider/ A-161 Clock Sequencer -combination, the A-151 Sequential Switch, the A-137 Wave Multiplier and the A-198 Ribbon Controller ( R2M included) 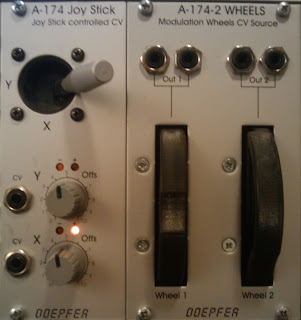 I was not really surprised by the list, a lot of them are high in my personal favorites list too. Not sure about the Vactrol LPG module though... i prefer other filters, like the A-121 Multimode Filter and the A-127 Triple Resonance Filter, simply because of their multiple outputs and extended control possibilities... and the A-124 WASP Filter because of its unique sound.

The Ribbon Controller (A-198) is also high on my list, and i also love other 'alternative' controllers like the A-198 Theremin Controller and the A-174 Joystick and A-174-2 Wheels modules.
These last two controller modules were so under-rated in the poll IMO,but sooo useful in live-situations.
My personal number one module is, without a doubt, the A-156 Dual Quantizer Module, but you have probably noticed that already by my earlier posts about this module and it's recent modification.

Feel free to leave your personal list with favorite modules in the feedback section...


Are you curious about what else is going in the Doepfer Yahoo Usergroup?

Click to join Doepfer_a100
Signing up is easy... and free!