Modifying the A-124 Wasp Filter for self-oscillation

Out of the box the A-124 Wasp filter can not go into self oscillation, in contrast to most of the other filters in the A-100 system. 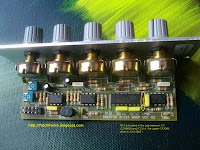 Lucky for us modifying the module for self-oscillation is quite easy;
Doepfer's DIY page tells us that;

"Soldering a 10k resistor in parallel to R13 (27k) leads to self-oscillation of the filter at the max. resonance setting of the resonance control."

Locating the R13 resistor was perhaps the most difficult part of the job. Because the resistors are all soldered on the PCB very tightly it is hard to read what the printing on the board says about the mounted resistors... but i found it!
R13 is located in the gap between IC1 (CD4069) and IC2 (i.e. the upper CA3080, close to C4/100pF). See picture above.

I did have a few spare parts lying around, including a 10k resistor. Soldering in parallel in this case was very simple. I did this on the backside of the PCB.
After locating the correct resistor you can simply solder the new resistor on the other side of it. Not much can go wrong.
Just be aware that your soldering-iron doesn't overheat or burn your resistor. 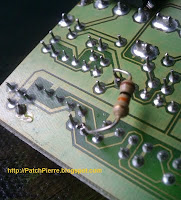 I read mixed reviews of this modification, but you have to remind yourself that the A-124 itself acts kinda unpredictable in the first place, due to the design that "abuses" digital inverters as analog operational amplifiers leading to distortions and other "dirty" effects.
A post-modification audio demo by Madrayken ( Dene Carter ) can be found HERE
WaspPostMod by Madrayken