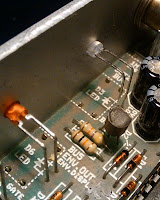 A few notes:
- You can not use any LED, only use the same ones that Doepfer provides. Always check documentation for more info.
- Due to technical reasons not every red LED can be replaced by a blue one. ( like the Vactrol modules ) Check each module's webpage before you start.
- Don't forget to check the polarity of the LED's ( + / - )
- Blue LED's are actually transparent/white when they are not lit.