If you are interested what kinds of sounds other Doepfer users make, or just want to be inspired, you can always go to the Doepfer Convergence Group on Soundcloud.
This site contains very interesting creative compositions made mainly on a Doepfer A-100 Analog Modular System. 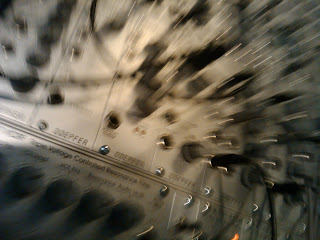 The group is moderated by James Bragg (AKA HyperDust), a synthesizer player and producer from Bristol UK who has played in various bands since the early 1980's and who's musical styles have varied over the years from New Romantic, Rock, Rock/Dance, Trance and various electronica.


" I've been building up 2 suitcases of modules over the last 5 years. I love their immediacy but also their temporary nature.
There is a type of Japanese painting where you paint with water on a special stone. It can look beautiful but after a short time it dries and is gone forever. A Doepfer modular is a bit like that. I'll never get that sound again - you just have to live in the moment. Celebrate the now. We spend too much time worrying about the future, and regretting aspects of the past."

The group has 49 members, and 18 tracks already have been contributed by 10 different musicians.
Some of these are complete songs but it also includes long live-improvisations and weird soundscapes.

Definitely worth a listen, if you have some spare time... Here's a quick preview, just to give you an impression;

biofeedback no.9 by cubistic microsonic