I read the following text on one of Doepfer's A-129 vocoder system pages a long time ago, but it is still on Doepfer's website; 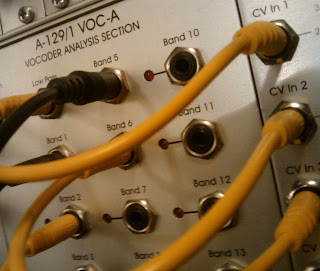 " A special MIDI-interface for the vocoder system is planned.

The basic functions are a 16-way CV-to-MIDI interface and a 16-way MIDI-to-CV interface (way 16 will be used for other functions like controlling slew-rate or voiced/unvoiced).

The CV-to-MIDI section converts the CV outputs of vocoder analysis into MIDI controllers which may be recorded by a computer sequencer.
The MIDI-to-CV section converts incoming MIDI controller information into CV's for the vocoder synthesis section.
Additionally we plan to store some factory and user definable 'vocals' in the MIDI interface so that you may call up complete vocals (like 'a', 'e', 'o', 's', 'sh' and so on) by MIDI program change events (may be we use another MIDI event type for this purpose).
Thus the vocoder system will become a universal MIDI controlled filter system not limited to the standard vocoder features. "

Okay, i must say that it all sounds impressive and also very useful.
I do hope this module will be taken into production, but i believe this has been
on Doepfer's webpage for a while now, which makes me think that this module will probably never be made.
It might be in the Universal 12 bit AD-processor-DA module plans, because these things do need some processing power but i'm not so sure about that...
With all the announced features you could imagine this would not be a cheap module to make, but we'll see though...

Find more of my 'Most Wanted' posts HERE

Email ThisBlogThis!Share to TwitterShare to FacebookShare to Pinterest
Labels: A-129, MIDI, MIDI-to-CV, Most Wanted, Vocoder