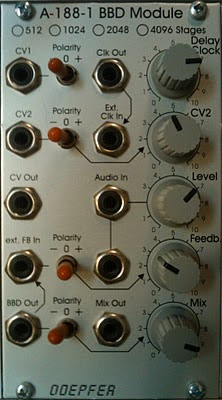 Module A-188-1 is a so-called Bucket Brigade Device module.

A BBD circuit can be regarded as a chain of Sample&Hold units (S&H) which pass on their voltages to the next S&H in the chain at each clock pulse.
From this also the name Bucket Brigade Device is derived as each stage of the BBD can be treated as a bucket.


The sounds generated by module A-188-1 are very special.
Typical applications for this module are: Flanger, Chorus, Analog Delay or Karplus/Strong synthesis.
Writing a post about the BBD has been on my list for a long time.
I own a 1024 stages version since the year it was released and i like it a lot.
The difficulty that i had was that it was pretty hard for me to understand all functions of this module completely, and than also have to write an explanatory post about it in English, which is not my native language...
I am very glad that Raul Pena (from http://raulsworldofsynths.com/) took the time and recently made some very interesting tutorial-video's explaining the whole A-188 in detail.
This set of YouTube video's show you all the secrets of the module, with clear narration and pro sound-examples. Make sure you have some time, because in total this 4-part tutorial is longer than an hour (!)

Video 1: Doepfer A-188-1 BBD basics
http://www.youtube.com/watch?v=G8fKvbutgds
"Overview of functions and features of the Doepfer A188-1 BBD Delay module.
Video, voice, and sound by Raul Pena."

Video 2: Doepfer A-188-1 BBD Basics
Audio Demo 1 : Setup and Filtering
http://www.youtube.com/watch?v=m3QXgRBdptQ
"Audio Demonstration for Basics learned in the previous video. This video contains an explanation of setting up the Doepfer A188-1 BBD Module and audio demonstrations in clock noise and filtering.Sound and Video by Raul Pena."

Video 3: Doepfer A-188-1 BBD Basics
Audio Demo 2 :  Feedback and Modulation
http://www.youtube.com/watch?v=nh2o7H5UE8E
"Audio Demonstration continued from Pt. 1- Setup and Filtering. This video contains audio demonstrations of the Feedback and Modulation capabilities of the Doepfer A188-1 BBD Module. Next in this series: Doepfer BBD Basics Audio Demo Part 3 More Modulation and VC Feedback.Sound and Video by Raul Pena."

Video 4: Doepfer A-188-1 BBD Basics
Audio Demo 3 : More Modulation and Voltage Controlled Feedback
http://www.youtube.com/watch?v=PulaMQLm13w
"Continued from A188-1 Audio Demo Pt. 2- Feedback and Modulation. This video contains more audio demonstrations of the modulation capabilities of the Doepfer A188-1 BBD Module. There is also an audio demonstration of Voltage Controlled feedback.Sound and Video by Raul Pena."