A Voltage Controlled Amplifier ( VCA or variable-gain amplifier) is an electronic amplifier that varies its gain depending on an incoming control voltage (or CV).
It is one of the most basic building blocks for a modular synthesizer.
Find more on this on Wikipedia.
Modules A-130 and A-131 are very simple VCA's that can be found in most basic Doepfer systems. 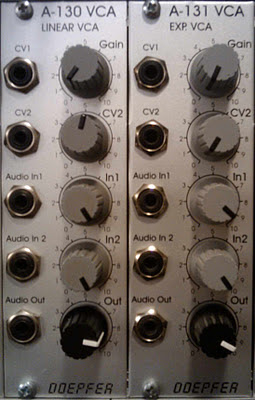 For audio signals, you would normally use the exponential VCA (A-131), and for control voltages the linear VCA (A-130), but it doesn't always have to be that way, though.

The amount of amplification of the VCAs is determined by the voltage at the CV input and the position of the gain control, which sets the overall gain in the system.
The VCA has two audio inputs, each with an attenuator.
They are amplified by the combination of the gain and the two CV controls.

Remark:
The old versions of A-130/131 (those with CEM3381/CEM3382, which are actually 2 VCA's on one chip*) are not able to process slowly varying control voltages (AC coupled in/output).
The newer versions of A-130/131 (those with CA3080) are able to process even slowly varying control voltages (DC coupled in/outputs).

Email ThisBlogThis!Share to TwitterShare to FacebookShare to Pinterest
Labels: A-130, A-131, Amplifier, Basic, Module Review