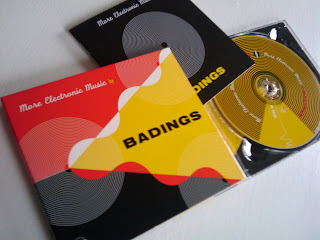 Henk Badings is still pretty unknown to a lot of us, but he was a classical-schooled Dutch composer/ engineer who was born in 1907 and passed away in 1987.

He had been composing since his youth, but after the 2nd World War he discovered (early) electronic and tape-music.
From 1956 until 1963 he worked with other Dutch electronic music pioneers like Dick Raaijmakers (who declined Stanley Kubrick's request to make the Clockwork Orange soundtrack)  en Tom Dissevelt in the acclaimed Philips NatLab.

He has written symphonies, concerto's, electronic and film music in his life, but this 2CD-set contains 5 of his most important electronic works.
Did they already "partly cover Badings' Electronic Music on the Popular Electronics Boxset (Basta 3091412), here's the best of the rest, to say so" (so not containing tracks that were already on THESE CD's that i reviewed earlier)

Fans that like Wendy Carlos, other NatLab CD's that i posted and such will probably like this collection of weird and sometimes dreamy, well composed soundscapes and even the more progressive electronic poetry-slam track "Dialogues for Man and Machine" with lyrics by Dutch singer/poet Ramses Shaffy