Look what popped up on eBay this week, a very rare StringPhaser module by a company named 'dd system' ?

This module was one of Doepfer's earliest synthesizer modules, made for the German Formant modular synthesizer, more than 30 years ago according to Dieter.

There were some expansion modules for the Formant available (only as kits) from Doepfer's early company and they were labelled "dd -system". 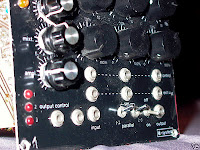 In the late 70s / early 80s Doepfer made several modules , among them were the System Timer with a master clock and different clock dividing factors, clock/reset polarities and clock/reset levels,
an External Input/Envelope Follower similar to A-119, a Frequency Divider similar to A-115, a Graphic VCO with high speed VCO, a VCLFO, a 12dB VCF with VC Resonance, a VU module (with LED bar), VC phasing I (with FETs), VC phasing II (with LDRs and lamp, similar to the compact phasing), Analog Sequencer 2x16 steps, Polyphonic CV/Gate keyboard, 4-Fold Band Pass with LDRs, and a Digital Sequencer with external RAM cards for 1024 or 2048 note memory (each of the 2102 RAM circuits had 1 kbit at that time!). 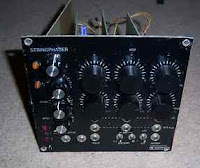 From eBay:
" It uses a 3 phase LFO which drives 3 separate phase shift cards (see pictures).
The module has separate 'fb.' and 'mod' controls and 'control' and 'ext. ust' sockets for each of the 3 phasers, and has controls for 'f1', 'f2', 'mixt' and 'ampl'. There are also 5 LEDs and sockets for output and input signals.
Finally there are two switches which are labelled 'ser.' and 'parallel'. 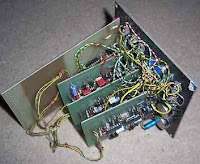 This is a vintage item and has some marks and scratches on the front panel.
The module is believed to be complete, but I've never tested or used the unit.
The previous owner indicated that the unit worked, but that the LFO rate was rather high however I have not confirmed this."

Doepfer replied that he still has a scan of the old StringPhaser document available.
The words are only in German (written by typewriter), the schematics still as a pencil drawing.