In 1992 Doepfer released their version of a General MIDI (GM)-compatible MIDI Expander, the GMX-1.
It was Doepfer's attempt to offer a fairly cheap alternative to the popular Soundblasters, LAPC's and cheap GM-compatible modules like the Roland SC-7.
The GMX-1 was (based on) a Dream mainboard - you will also find this module as Dream GMX-1 mentioned in old magazines - Future Music rated it 86/100 in issue 4, page 41 ) 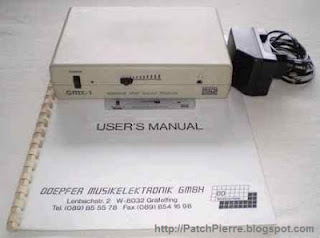 It was a simple grey box, with only an on/off switch, a volume slider, a mini-jack headphone output and an LED that visualized incoming MIDI signals on the front.
On the back it had 3 MIDI connectors (In, Out and Thru), stereo audio-outputs (cinch) and a 9 Volts adapter input.
Beside that, it also had a nine-pin RS-232-C port that enabled the unit to be connected to a serial port without the need for a MIDI expansion on your computer.
With this port you could hook it up to almost any PC, Commodore Amiga or Apple Macintosh, and it even came with MS Windows drivers and 2 MS-DOS programs that could play back MIDI-files.

The sounds (158 instruments, 47 Sound-effects and 92 percussive sounds) were based on PCM (Pulse Code Modulation) and Algorithmic Synthesis, sampled at 16-bit / 44.1 kHz , and could not be altered.
You could control a few things like volume, pan, velocity, after-touch, modulation and pitch-bend, but no chorus, reverb or other effects.
The Doepfer GMX-1 only had 20-voice polyphony, so it did not fully match the (24-voice) GM standard, but beyond that it was completely GM-compatible.
Besides General MIDI the module also offered an MT-32-mode, that could emulate the (classic 1987) Roland MT-32 module settings.

It sounded decent, but not too impressive, but what would you expect for the price...
Reports say it didn't sound awful and that it actually had some good sounds too, like the pizzicato strings and percussive sounds like vibraphone, marimba, music box and harmonica...
But if you'd put your GMX-1 audio through one of your own FX processors it already sounded a lot better.

Price at the time was 649 DM > around 330 Euro's
Only 250 units were sold through Doepfer, but Zone Distribution in Britain has probably distributed at least a same amount through England and perhaps even more worldwide.