To celebrate the first anniversary of ModularGrid, they introduced the beta of TrueGrid a few days ago.


TrueGrid is a fully functional true modular web synthesizer which let's you create, listen and share modular synth patches.
It consists of 10 Eurorack modules and some patch-cables, that you can rewire, turn knobs and move around the same way as a real modular synth... plus there's a way to save your patches (and load other people's creations)
Basically they added audio engines behind some of the modules from ModularGrid's huge ("1300 to go") database.
It is really fun to play with, although not all functions are working (yet).

Update 19/10: The new Tape Recorder lets you record your patch and export it to .wav file
It also replaces the Outs module as endpoint.
Update 24/10: TrueGrid now supports MIDI, more info at http://modulargrid.net/e/pages/truegrid_enable_midi …

You can find TrueGrid at http://modulargrid.net/racks/synth/ 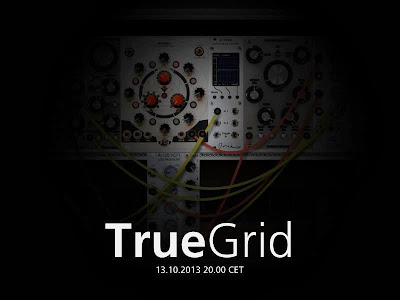 At this time TrueGrid will satisfactorily run in Google Chrome only.
Support for other browsers will follow... (also iOS)