A Vactol is an opto-isolator device that is often used for channel-switching in many modern amplifiers, but these electronic parts can be used in various other ways too, for example in synth-modules like Doepfer's A-101 Series and the A-102 Low Pass Gate module.
There are many kinds of optical isolators, but the most common is the LED/photo-transistor type. 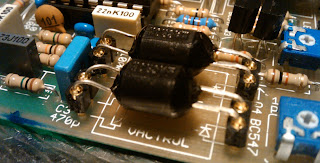 A vactrol is a combination of a light depending resistor (LDR) and light source (LED) both put into a small 100% light-proof case.

The principle of a Vactrol is very simple.
When an input current is applied to the LED, the output phototransistor turns on.
The only connection between the LED and phototransistor is through light -not electricity, thus the term optical isolator.
These optical isolators are primarily digital in nature with fast response times suitable for interfacing with logic gates. Rise and fall times of a few microseconds, faster for some isolators, are typical.

So together, the coupled pair act as an electrically variable potentiometer.
Since the output element of the AOI is a resistor, the voltage applied to this output resistor may be DC and/or AC and the magnitude may be as low as zero or as high as the maximum voltage rating.
Because the input will control the magnitude of a complex waveform in a proportional manner, this type of isolator can be used as an analog control element in all kind of ways in analog synthesizers.

Email ThisBlogThis!Share to TwitterShare to FacebookShare to Pinterest
Labels: A-100, A-101-2, LED, Vactrol