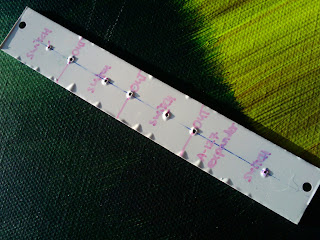 Now that i finished my first 'real' module-modification i couldn't wait to start with the next project.
At first i wanted to replace a red LED for a blue one on one of my modules myself, but i couldn't decide which module i should pick for this... and i'm still not sure, but that can wait....

Another plan that was in my head from the beginning was the placing of 3 switches on the front-plate of my A-127 Triple Resonance Filter. There are 3 jumpers inside this module that allow the user to switch the filter-type of each of the three channels between Band-Pass (standard) and 12 dB Low-Pass. I have seen some examples on the web of this modification, most of them just with the switches mounted on the A-127 itself, but unexperienced as i am, i was too afraid to damage the front-panel and went for an Expander Module design. 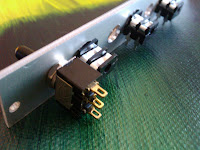 So that is why i am building it into an official 4HP blind-panel that i bought from Doepfer. Each of the three A-127 channels on my expander module design will have a switch to switch the channel's filter-mode and will also provide an extra (linked) audio output.
( mainly to fill up the space, but i aligned these with the A-127's original outputs to make it look more like an official Doepfer module ) . 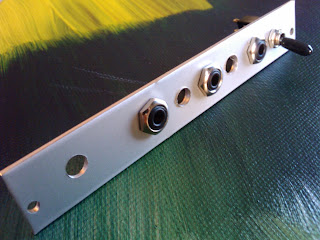 To complete the expander module i also want to place a switch at the bottom that has the function of the J3 jumper that is inside the A-127 module on the mix circuit-board. This switch can put the module in a mode so that both levels of the filter and the original can be controlled with attenuator 1 ( audio level in )

I am not finished with the project yet, the mounting of the switches and extra outputs is done. Wiring is the next step, i'll write another post on that later this week...
Find Part 2 at http://patchpierre.blogspot.nl/2010/12/modifications-iii-127-triple-resonance.html


Update March 10, 2014
Doepfer announced an official Breakout Module for the A-127,
find out all about it at http://patchpierre.blogspot.nl/2014/03/doepfer-127-bom-filter-breakout-module.html