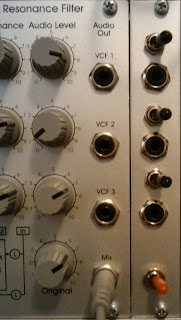 Hmmm... that went faster as i expected.
My brand new self-made A-127 Expander Module is now almost finished.
( Find part 1 HERE)
The switches are wired too, and the overall look of the module is even better as expected.

I did have some trouble with drilling holes through the aluminium front-plate at first, but it seems i aligned the sockets nice enough with the output sockets of the A-127 itself.
The switches work smoothly and the 'new' 12 dB filters sound sweeeeeet.

I'm very happy with this module, and glad that i went with this option instead of just putting switches on the A-127's front panel. 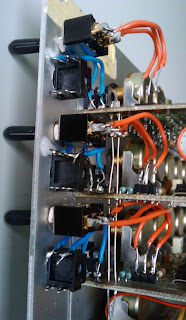 The wiring of the modules on the backside was quite simple. Red wires were used for switching between the different filter-modes, the blue ones the the audio-multipliers, and yellow ones (not visible in the picture) for the lower switch.
I did the soldering without removing anything from the module, but you might want to remove some components for easier access.

Instead of soldering you can also use small (0.1") wire-sockets at the board's jumper-spots. An example with detailed information of this can be found HERE

Update March 10, 2014
Doepfer announced an official Breakout Module for the A-127,
find out all about it at http://patchpierre.blogspot.nl/2014/03/doepfer-127-bom-filter-breakout-module.html