Via MATRIXSYNTH i stumbled upon this module:

The Analog Bytes tbDSP is a modular synth that is currently under development.
So far it is hard to describe what this eurorack kameleon does exactly, but they do try to explain it on their website.

"With tbDSP we set out to create not only the most powerful DSP synthesizer platform in Euro, but also a platform that could evolve over time.
At the heart of this goal is the ability to add functionality and make improvements once the module has been released into the wild.
To support this, we put a USB port on the module and developed PC and Mac applications so that when a new idea pops into our heads, we can share it with everyone that owns the module. Likewise, it will allow users to influence development...

..."My appreciation of the old Atari POKEY sound chip compelled me to recreate its guts in a tbDSP engine.
Some might argue that doing so is a waste of perfectly good DSP, but I saw an opportunity to make an engine with features that I wish the original chip included.
The new engine is called POKE.
I want to cover two of the new features here."

You can also listen to sound examples on their tbDSP SoundCloud 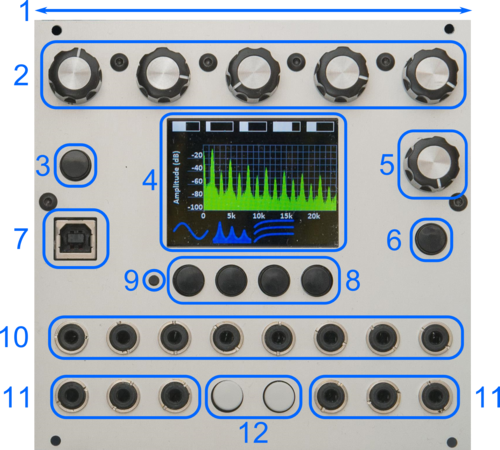 The tbDSP features three chips that share the processing duties:

The FPGA processes audio at sampling rates as fast as 98MHz, and the SHARC can compute over 24,000 1024-point FFTs per second."


" Since the tbDSP hardware is capable of so much, it would be silly if it were limited to always performing just one specific function.
That would be like shipping a smart phone that ran one app and didn’t have an app store to provide more.
Since we don’t want you to get bored with tbDSP, and because it’s too pretty to collect dust, we designed it to support multiple functions.
We refer to these functions engines.
One example of an engine is an oscillator. Another example would be a filter.
Only one engine is supported at a time, but all of the other available engines are only a couple of button presses away.
And, with FW Update, we can deliver new engines whenever we feel inspired.
We currently have multiple engines under development, but we’re not sure which ones we will support upon initial shipment yet."

" Since tbDSP is a multi-engine module, the purpose of the engine knobs depends on which engine tbDSP is currently running.
For example, knob 1 may control an oscillator frequency when tbDSP is running an oscillator engine, but when tbDSP is running a filter engine, that same knob may control a cutoff frequency.
It’s kind of like a console video game controller: the same controller is used for every game, but what the buttons on the controller do depends on the game you are playing.
So when you are using tbDSP, how do you know what the engine knobs do?
It’s simple: just give them a touch, and tbDSP will display on the screen the name of the knob in that engine, and the knob’s current value.
So when tbDSP is running an oscillator engine and you touch knob 1, you will see on the screen something like: “Frequency: 440.0 Hz”.

Here’s a quick video to see it in action (please excuse the video compression artifacts):


Here is a video of the spectrogram, just so you can see it in action (please excuse the video compression artifacts).

You can find additional details and follow progress at http://tbdsp.tumblr.com.all questions, comments, and thoughts are posted on this muffwiggler thread

The module will be available somewhere in 2014, price still unknown.