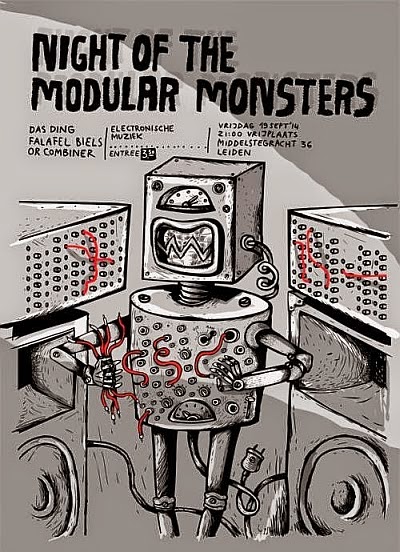 Last night I went out to see a few modular synth-based acts in The Generator at Vrijplaats Middelstegracht in Leiden (NL) at the 'Night of the Modular Monsters'.
(Check out the event on Facebook)
In an intimate setting; a theatre-style room with comfortable cinema-seats, a big screen with cool visuals three live-acts were performing for a group of around 50 visitors...

OR Combiner, a duo consisting of Lama Waaien & Tony Dubshot (from http://www.dubbhism.com/) opened the evening with a dubby set, but sadly I missed their act because i was a bit late and the show had to start half an hour earlier.
Luckily they recorded it, and you can find it at https://soundcloud.com/ism-studio/night-of-the-modular-monsters

'Freepatcher' Falafel Biels from Rotterdam did a nice 40-minute long non-stop noisy/atmospheric set.
He plays at these kind of events quite often and also designs his own line of Monster Modules.
After the show he showed me a few of his creations, including his 'Bunch-a-clox', a few interesting clock divider modules and other Falufar-branded modules.
Find more on his Facebook page.

Das Ding from Rotterdam closed the evening with an electro-set.
Danny Bosten a.k.a. Das Ding has been creating powerful dark electro since back in the early 1980s, releasing his music and friends’ music via his own cassette label called Tear Apart Tapes.

He told me that he had recently begun to build his own Eurorack-compatible mini-sequencer.

It's called the Baby 8 and if you're interested you can buy a hand built version (stand-alone or rack) directly from Danny. Just contact him via Facebook.


Check out this Juno Plus interview about the Baby 8 for more info.

Overall I did have a nice and relaxed evening.
I liked the venue, and it seems perfect for these kind of occasions.
This is the first time i really went out and met some of the interesting people from the Dutch Modular scene.
I did have to leave a bit early because my weekend-schedule is always very full, but i hope i can take more time next time.

I hope to write some more party-reports on PatchPierre.Net in the future, and maybe do some interviews with all these interesting people...
Main info via Dubbhism:
http://www.dubbhism.com/2014/08/night-of-modular-monsters_30.html