Today Dieter Doepfer sent out a statement concerning a few batches of the A-190-3 USB-to-CV/Gate module.
Luckily the 'problem' only affect a small group of A-190-3-owners, but here is Dieter's statement:

" Dear members,
We discovered that our manufacturer made a mistake during the last series of the A-190-3 production.
The USB interface of the modules were not tested correctly.

If your A-190-3 is not recognized by the computer you probably received one of these faulty modules.

Modules with these test labels are affected:

The Midi interfaces of these modules work as they should.
Only the USB interface is affected (because two capacitors have been assembled in the wrong way).
Please return the module to the dealer where your purchased it for free replacement and free shipping charges.
Please accept my apologies for this fault.
Maybe we will have to check more control samples in the future.

If you are lucky enough to have an A-190-3 that doés work, don't forget to check out THIS POST about the somewhat hidden arpeggiator.
(I believe this arpeggiator function is still not mentioned in the manual or on the Doepfer website)

Email ThisBlogThis!Share to TwitterShare to FacebookShare to Pinterest
Labels: A-190-3, Dieter Doepfer, USB

It's pretty basic, but every once in a while i receive the question: "Where can i find the fuse on my Doepfer rack?"
I must admit i had to search for it too the first time i blew up a fuse.

The answer is quite easy.
On the backside of the G6 rack (and G3 rack and most other cases and koffers) you'll find the power supply and the On/Off switch.
Between these two there is a small compartment where the fuse can be found.


Always remove the power-cord before you are opening the fuse-box!

With a small screwdriver you can gently pull this fuse-box out of it's place and replace your A-100 fuse.
Check out the Doepfer FAQ to see what fuse-value you should use in your rack, depending on rack-size and country.

Raul Pena has published the first (of 5) episode of his next tutorial video series.
This time it is all about the A-156 Dual Quantiser module.

" Continuing Exploration of the Doepfer A156 Dual Quantizer. This section examines using an Envelope as a CV source for the quantizer, transposing quantized sequences and triggers. Next Video Doepfer A156 More Voltage Sources, Transposing, and using triggers Part Two. Sound and Video by Raul Pena."

More videos will be added after they appear online.
Don't forget to check out Raul's website at http://raulsworldofsynths.com/
No comments:

Sad news for some of the non-German-speaking A-100 fans;

Das Grosse Buch zum Doepfer A-100 Modular-Synthesizer, the German A-100 by Andreas Krebs that was published half a year ago (also check my earlier BookTips) will probably not be available this year yet.
I recently contacted him about a possible release-date of the (pre-announced) English version, but he replied that the project is delayed.

He wrote: " There had been plans to release the book end of this year. However, there have been some big delays in this project due to personal reasons (currently we’re moving from Munich to the countryside).
I hope to be able to put some more efforts on the english version as soon as we have moved and everything is “in its place” again."

I hope his situation will improve soon...

Email ThisBlogThis!Share to TwitterShare to FacebookShare to Pinterest
Labels: A-100, Andreas Krebs, Booktip

Uploaded by Corrosiveabuser
Find another one HERE
No comments:

Re-arranging my A-100 System 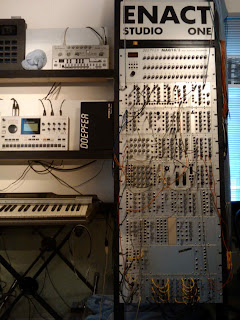 Last weekend i finally had some time to re-arrange my A-100 system.
I seems like this just has to happen every  few years...
It's was dirty job... a lot of screwing had to be done...

The main problem was the (old) location of my vocoder system, i had it in the middle of my rack.
That meant that i had a lot of wires hanging over the modules in the row below it.
I took out the vocoder modules and placed them at the bottom row.

My Joystick/Voltage inverter combo, the Modulation Wheels and the Manual Trigger modules were replaced to where the vocoder used to be, for maximum real-time control from the center of my setup.

The top three rows stayed the same, with mainly oscillators, noise mixers and filters (plus the 2 Theremin modules).
In row 4 i placed an extra A-180 Multiples next to my Quad ADSR so i can easily send multiple envelopes through my rack.
The rows below that have an assortment of various modules; LFO's, Distortion, Waveshaper, BBD and Frequency-shifter, to name a few... and my Trigger Sequencer, Divider, Inverters and Logic Modules.

At the lowest two rows on the left you'll find my inseparable section of modules from where i can switch playing-modes between Ribbon Controlled or by Keyboard (MIDI)-controlled... find and extensive post about this section HERE.

Email ThisBlogThis!Share to TwitterShare to FacebookShare to Pinterest
Labels: A-100, PatchPierre

This versatile module, available in 2 sizes (standard case 200 x 100 x 42 mm or the 19" version with 1 HU), was equipped with 4 MIDI inputs and 4 MIDI outputs on the backside.
It did not have an on/off switch, and had to be powered by an external power supply.


Inputs and outputs could be easily assigned in any combination.
If you'd assign multiple inputs to a single output, the signals got merged.
The routing was set with 8 buttons and 8 LEDs at the front panel that were assigned to the 4 MIDI inputs and outputs.

The MMR4/4 had 4 non volatile memories (Presets) to store 4 different matrix configurations.
The LEDs displayed the input/output configuration and could be changed very easy with the corresponding buttons.
During normal operation (monitor mode) the LEDs displayed the MIDI activities on the inputs and outputs.
A panic button was available transmitting "all notes off" on all channels and outputs if activated.

Around 600 of these units were made until they stopped selling the last ones in March 2001
There are no plans of a re-release of this module.

Find out more in the online manual HERE
No comments:

Pete Shambler has made a nice video demonstrating the Doepfer A-172 Minimum/Maximum Selector module.
In the video he shows some of the ways he tends to use it... pretty interesting...


" Five quick patches with the Doepfer A-172 Max/Min utility module. The first three are in stereo, so headphones are recommended!"

More info at http://www.theshamblers.blogspot.nl/
,and find more about the A-172 HERE
No comments:

Email ThisBlogThis!Share to TwitterShare to FacebookShare to Pinterest
Labels: A-172, Pete Shambler, Video

After the unplanned re-design of the Dark Energy (due to the unavailability of the CEM3394 chip ) there now seem to be more re-designs of Doepfer Modules coming up.

This time the problem is the availability of CA3080 (and 3080E) chips.
The CA3080 (datasheet PDF) is a 2MHz Operational Trans-conductance Amplifier (OTA), which is used in quite a few Doepfer (and other brands) modules and there seems to be no direct replacement equivalent.
The original chip itself hasn't been produced since 1975 and the wafers have all been used up a couple of years ago, according to some sources.
No-one seems to have decent stock anymore, and there was a buying craze when it went out of production.

This will take a lot of precious time for Doepfer that would otherwise be spent on manufacturing new modules.
Sadly these re-designs will not have any obvious benefit for the customers.
No comments: