At NAMM 2010 in Anaheim USA, Doepfer showed a very early prototype of the A-157 8 x 16 Step Trigger Sequencer. There's not much information available about this module, besides the info in the NAMM 2010 News PDF on the Doepfer site. Even Doepfer's own Future/New Modules section doesn't have any info on it. 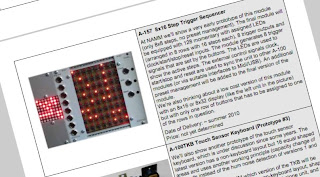 What we do know ( about the prototype(s) ) is that it will be a 'simple' and affordable trigger sequencer (only 8x8 steps, no preset management).
The final module will be equipped with assigned LEDs (arranged in 8 rows with 16 steps each), 8 trigger outputs and clock/start/stop/reset inputs.
It generates 8 trigger signals that are set by the buttons. The LEDs are used to show the active steps and the external control signals clock, start/stop and reset are used to sync the unit to other A-100 modules (or via suitable interfaces to Midi/USB).

An additional preset management will be added to the final version of the module. At the time Doepfer was also thinking about a low cost version of this module with an 8x16 or 8x32 display (like the left unit in the picture) but with only one row of buttons that had to be assigned to one of the rows in question.
The expected date of delivery of summer 2010 was never made. 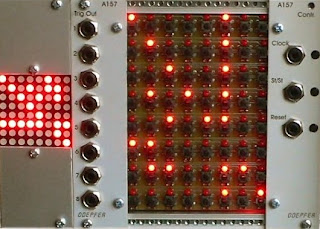 In fact i haven't found anything more on the web or in the forums about this module, what the reactions were, or a new expected release date.
They are probably still working hard on perfecting the module. The module shown at NAMM wasn't even finished but did give a nice insight on what they are working on.
I like the idea and layout of the front-panel, but personally i prefer my Clock and Reset inputs at the left side of a module, i guess they will at least change that in the final product.

I'd love to have one in a near future, programming rhythmical stuff will become much easier with a module like this, looking forward owning one, but i am afraid i have to wait a while...

Email ThisBlogThis!Share to TwitterShare to FacebookShare to Pinterest
Labels: A-157, Most Wanted, NAMM, Sequencer, Triggers