The DIN Sync (or Sync24) standard, was introduced by Roland in the 80's for synchronizing sequencers, drummachines and (synth-) arpeggiators. The name Sync24 is derived from the frequency of the pulses, 24 pulses per quarter note (PPQN). A clock signal  of 2.51 V, at 24PPQN, defines the speed of the sequence or drum pattern. The start/stop signal defines if the sequence is running and has a voltage of 0 or +5 Volts. A lot of Roland's products were using this standard at the time, so some have sync-in, -out, or switchable sockets.

After the wide adaptation of the MIDI standard, the DIN sockets started to dissapear from most instruments. Syncing instruments via MIDI is now handled by the MIDI Beat Clock at a same 24 PPQN rate.

The SYNC plugs look the same as MIDI plugs ( DIN-standard, round with 5 pins ) ,but the pins have a different configuration as the MIDI plugs. The Din Sync standard can only handle clock signals (for tempo) and start/stop signal, so it sends no pitch-control. More info on Doepfer's SYNC FAQ page. 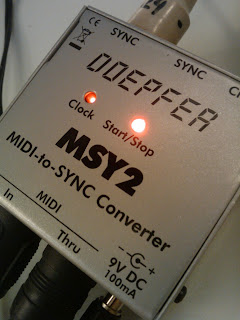 I know the DIN-Sync standard is now close to death. Only a few 'modern' drum-machines still have a SYNC In or Out, like for example the Novation Drumstation that i own.

The idea of a A-100 SYNC converter module doesn't sound bad in my opinion, perhaps a kind (extended) modular version of  MSY2 MIDI-to-SYNC Converter that Doepfer sells? ( A-190-X maybe? )

If i might suggest some extra features, why not add a 16 (or more) trigger outputs (A-160/A161-style) , SYNC-in possibility, reset output(s) and switches on the front for choosing dividing factors.

That, together with a set of MIDI In and Thru, or an internal link possibility  to the A-190, would make an awesome (and not too expensive) module that for example could be used for percussive effects like triggering drumsounds in Sync with your old equipment.

Email ThisBlogThis!Share to TwitterShare to FacebookShare to Pinterest
Labels: A-160, A-161, Gate, MIDI, Most Wanted, MSY2, Sync, Triggers