The latest addition to my modular system is the A-138p/o Performance Mixer set of modules... 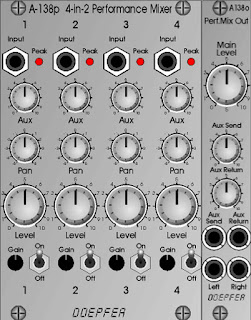 Modules A-138p/o are a simple performance mixer that I use as and end-mixer for all the signals coming out of my A-100, and for merging my TB-303 audio, before it all goes into my mixing-desk.

Module A-138p is the 4-fold input module, A-138o is the output module that can be combined with one or more A-138p.
I read somewhere that the module didn't start off as commercial product, but as a personal hobby-project of Dieter Doepfer who just needed this module for himself... It did go through quite a few prototype stages before it was released in this final form.

The A-138p has 4 input channels, with separate controls and a mute
switch for each channel.
The controls are for Gain (control to adapt different audio levels -also for external signals), Level (the main volume control), Aux and Panning
An internal jumper for each channel lets you choose between Aux pre/post main Level control.
There is an internal connection to the output module and to other A-138p modules
The A-138p requires the A-138o Output module (no stand-alone use)

I must say that I am extremely happy with these new modules. It's just what I needed to create an easier workflow in my system.
I especially like the Aux send/return function, which makes it a perfect companion for my Qu-Bit RT-60 DSP multi-effects module, but you can also use it for sending audio to a BBD-module, a filter or spring reverb for example.
Alternatively the Aux send can be used for pre-listening in combination with a headphone.
Like any other Doepfer module this one is easy to use too, the controls are very basic and straightforward. These modules are now the heart of my A-100 system.

About a week after I ordered mine, the word got out that Doepfer was working on another version of this module (A-135A/B/C) with dedicated CV inputs for each parameter and a Quad Envelope follower module with attack and release controls for each of the 4 channels.
Some prototypes of these modules are already touring through the world, I did see one in the Alex4 rack at the Amsterdam Dance Event in October of last year.
You can read more about that in my next blogpost, but I must say it looks promising.
At the moment I don't really need such a module or have the HP space for all of them. but I do see some exciting possibilities in these modules.